John Curran’s presentations are always lively, educational and wholly interactive (especially during Q&A).  Today’s presentation at LinkedIn’s Sunnyvale Headquarters was no exception to the rule as John focused on how to build a better IPv6 internet that users will actually be interested in using.  He also reviewed challenges associated with enterprise IPv6 adoption delays. 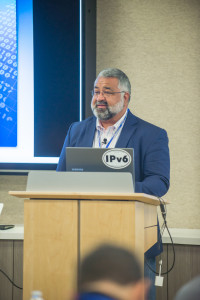 His first point discussed ideas on changing the fundamentals of network governance in IPv6 and how it could virtually eliminate botnets, spam, and general NAT headaches.  Notably, those changes and choices would also eliminate a lion-share of demand and spending for boundary security solutions used by many enterprises today.

Moreover, he posited that when considering the end-user perspective on today’s Internet that, “It does not matter what you do [as engineers], the average internet user still sees the same thing when they login [and it’s not the network engineer’s work that moves them].”

He continued by pointing to the attendees in the room reminding us of our accountability and that we, “…are the ones building a new internet on IPv6 yet running it the same way that we ran the IPv4 Internet.”  True, many network engineers, especially in enterprises, are seasoned with v4 habits such as straining to conserve IP addresses.  As such, we run the risk of doing too much subnet-ing with IPv6 resulting in a loss of operational visibility by breaking the rules of nibble boundaries.  Considering most assignment blocks will be assigned as a /32 or /44 with plenty of address space to spare, we really have no excuse to do things incorrectly.

From our perspective, this just proves that we still have a heck a lot of work to do educating network engineers if IPv6 adoption is going to happen at the enterprise level.