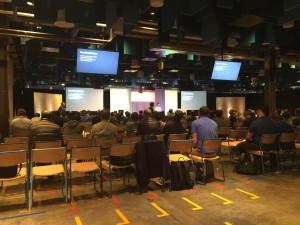 CAv6tf attended Facebook’s “NETWORKING @SCALE” invite-only event this Tuesday and Wednesday where engineers and scientists from multiple companies collaborated on ways to build and manage large-scale service networks for millions of users and applications that are built upon the next generation Internet.

Marking Facebook’s 2nd anniversary of this event, we heard presentations regarding Software Defined Networking, 60GHz wireless networks, creation of new routing protocols, and convergence of servers,  switching, and routing to solve complex engineering challenges.  Engineers from Facebook, Akamai, Juniper, and Comcast, to name a few, were badged and in attendance.

At this week’s event, Facebook’s research division presented their recently announced Terragraph and ARIES terrestrial connectivity projects and shared some of the engineering challenges they have overcome in order to deliver consistently high-bandwidth internet experiences for the underserved internet users located around the globe.

Also, NASA JPL Scientist, Dr. Luther Beegle, was in attendance to present network and operational challenges in InterPlanetary Networking (IPN).   His work on the Mars Future Rover plans for 2020 Launch highlighted the networks required to connect and conduct work for the SHERLOC spectrometer optical system.  Latency and intermittent communication loss are important store-and-forward problems network operators must deal with both on Mars and here on Earth. Much to the enjoyment of all attendees, Dr. Beegle discussed his project and networking methods used in orbital networking.

You can check out the abstract for Facebook’s Terragraph/ARIES project here.

You can visit the Mars 2020 Mission Page and SHERLOC abstract here.

This entry was posted in CAv6TF. Bookmark the permalink.